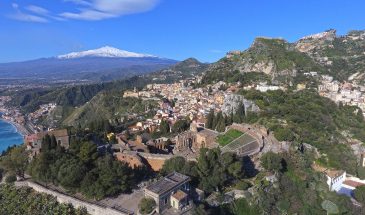 ‘Sicily is a continent’, the locals will tell you. It might sound strange when you look at this small island on a map, but what you will learn over the course of a week is that Sicily is Italy in miniature. Eastern Sicily is a showcase of its beauty: from…

‘Sicily is a continent’, the locals will tell you. It might sound strange when you look at this small island on a map, but what you will learn over the course of a week is that Sicily is Italy in miniature. Eastern Sicily is a showcase of its beauty: from the Greek & Roman historic sites to elegant UNESCO heritage Baroque architecture, to majestic Mt Etna, a still-active volcano and scenic seaside, there is so much to enjoy for a deeper understanding of this complex land, away from the stereotypes. Food and wine are an integral part of Sicily’s culture. With a rich culinary tradition benefitting from fish & seafood recipes to mountain delicacies in a nutshell, its robust and the welcoming Sicilian wines guarantee pleasures for all the senses.

To make a tour of Sicily in a week is overly ambitious so we have focused on what we feel is the most interesting side of the island. This tour starts and finishes at Catania airport.

Ragusa, a baroque gem on the way from Catania to Siracusa

You will be met upon arrival to Catania airport in the morning by your driver and guide for the week. The first attraction of your tour is the splendid, picture-perfect baroque town of Ragusa. Ragusa Ibla is a splendid example of an ancient Italian community. Perched atop a scenic cliff facing (relatively) modern Ragusa, Ibla became popular among Italian and international readers as the main location of the adventures of the popular fictional detective "Commissario Montalbano." For art and history lovers, there's a plethora of UNESCO-heritage buildings that are easily accessible, as well as spectacular hikes on the hills nearby. We will discover the best sights in a relaxing afternoon stroll and a serious coffee after our tasting lunch in a centuries-old stone mill nested in a scenic canyon. Later in the afternoon, we will arrive to your hotel in Siracusa followed by dinner in Ortigia, the historic center of this splendid seaside town. Meals included: L, D

After an early breakfast we will meet our cooking instructor for the day and take a tour of Ortigia's small but colorful market. After an educational cooking class and a social lunch together we will tour Ortigia itself with an expert local guide. From cathedrals to the best cafes, you'll even learn about the city's most famous son, the inventor Archimedes. If you wish to complete your historic exploration, we recommend (optional) to visit the Greek theater and Roman amphitheater archeological sites on the edge of Siracusa. At the end of the tour, we will provide plenty of suggestions for your free dinner. Meals included: B, L

A full day of sightseeing and samplings today, from wine tastings of the local variety of Nero D'Avola grapes to seafood in one of Sicily's prettiest seaside villages: Marzamemi. Poetically named "Mars al-hamam" ( "Turtle Dove Bay") by the Arab founders 10 centuries ago, it became famous for the original tonnara (tuna processing plant), which was to become one of the most important on the island. Marzamemi continues its artisanal fishing and processing activities, producing all manner of delicacies, including canned tuna, dried tuna roe ("bottarga" in Italian), smoked swordfish, marinated anchovies, seafood pasta condiments, tuna salamis and more.No better place to enjoy a sunny afternoon and a gourmet fish lunch! One more World Heritage Site is to be found in Modica, however our interest lies in the world-class chocolate prepared according to centuries-old recipes, which we will discover in a traditional chocolatier which has featured in many food TV programs. Later in the afternoon you have the chance to discover Noto, the capital of Sicilian baroque, famous for its fine buildings of the early eighteenth century and declared a UNESCO World Heritage Site. A clear example of the theatrical taste which characterised 18th century architecture, the local limestone has been burnt gold by the sun, hence the nickname of "golden city", particularly photogenic at sunset. Depending on the group's preferences, we can have dinner in Noto or in Siracusa. Meals included: B, L, D

Catania Street Food tour on the way to Etna volcano

Leaving Siracusa after a light early breakfast we will arrive in Catania to take a food tour tasting many of the specialties of the famous street market with a local guide. Catania was the capital of the Kingdom of Sicily under the Aragonese dynasty and is notable for a scenic Cathedral and the splendid baroque Via dei Crociferi, with the famous S. Benedict Monastery. The city is characterised by an original baroque style and unique streets built with black lava stone creating an elegant effect, to be enjoyed while people-watching sipping a coffee at the end of our tour. After our market and city tour of Catania we will head towards the farmstay on the slopes of Etna where we will be staying for the next three nights. A family-style dinner will be served at the farm or in a local restaurant nested among scenic olive and orange trees plantations. Meals included: B, L, D

Taormina and the Godfather

Taormina: the most famous Sicilian location in the world evokes the Dolce Vita, hosts actors and actresses, and grants glamor, luxury and seaside relax. After visiting the fascinating Greek theatre, nested in a splendid location with spectacular views over the scenic beaches and the snow-capped Etna volcano, you will have free time for a nice walk among the picturesque medieval streets and go shopping around the local handicraft (coral jewels, precious laces, ceramics, sweets and much more). "The Godfather" is generally considered the greatest crime movie of all time and one of the quintessential, although controversial, big-screen references to Sicily. In the afternoon we will pay homage to the fictional Corleone family's roots in Forza d'Agro, a pretty town cropped up as a backdrop in all three segments of the trilogy. Fanning around the Cattedrale di Maria Santissima Annunziata e Assunta, it remains almost untouched by the centuries. After a coffee in another picturesque film location in nearby Savoca, the day will end with an overview of the beautiful Riviera dei Ciclopi. You are free for dinner this evening, your guide will be available for suggestions and to bring you to a restaurant close to your accommodation if you prefer. Meals included: B, L

After breakfast we will set foot on one of Sicilly's iconic symbols: mighty Etna, the highest (3350m) volcano in Europe and one of the largest and most active in the world, nowadays Unesco World Heritage Site. Its regional park hosts a unique flora and fauna, villages and farms, and traditional methods of forestry, bee-keeping, wineries, stonework and carpentry. We will reach the “Crateri Silvestri”, small volcanic cones now inactive, surrounded by ancient lava flows. The view beyond the mountain’s hundreds of subsidiary cones and craters, can extend across the whole of Sicily , the Aeolian islands and Calabria for a breath-taking experience. According to the group's preferences and the meteorological conditions, we can arrange an optional hiking excursion all the way up to the top craters via funicular and off-road vehicles. Have you ever tried a noble wine created on a volcano? Today is your chance, visiting of a high-altitude winery with ample wine tasting of the peculiar local production with autochthonous varieties, accompanied by typical local specialties. Return to the accommodation for relax and a farewell dinner. Meals included: B, L, D

A delightful granita in Acireale towards Catania airport

According to your departing flight from Catania airport and the schedule for the rest of your holiday, we recommend to enjoy a farewell granita, the most classic form of Sicilian breakfast, in the pretty historic center of town of Acireale on the way to Catania. Meals included: B